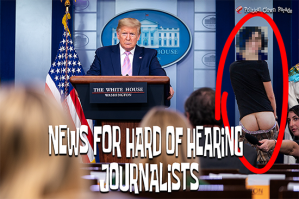 I worked with the press for decades.  The ones I worked with were nice people, but they had to write something that people will read, until now.  Journalists are supposed to (try to) and learn about the subject they are covering. Now they write ridiculous stories and then write the opposite.  They don’t even bother to fact check anymore.  No one reads corrections so they don’t care, and it shows.  I can’t even say this current lot are nice.  If you see below, they aren’t well liked either.

Lately, they have been circling the wagons to cover one side of the political scene or the other together.  They are exposing themselves to the public as to how little they know or how little they want to hide their bias.  A bunch of them just want to jam on the president out of spite, but they are either self-owning or he is swatting them like flies, especially Jim Acosta.

Twitter/Twitchy caught on and now instead of lawyer jokes, it is journalist jokes.  For the most part, this lot deserves what they are getting.  They are now as useless to regular people as celebtards and sports stars trying to give their opinion on something other than their sport.

The hashtag is #JournalistJokes, go see for yourselves.  Here is a list of some as a starter.  Others are more creative than me.

“Three journalists walk into a building. You’d think one of them would’ve seen it.”
“What’s 5 miles long and has an IQ of 30?” “A JOURNALIST PARADE!”
“Three journalists walk into bar and say ‘ouch’ – then write stories about how the bar is racist and phobic.”
“How does a journalist change a light bulb? He holds while the whole world revolves around him.”
And Twitchy’s pick for the winner: “What are the best four years of a journalist’s life? Third grade.”
“Why are there only 2 pallbearers at a ‘journalist’s funeral?” “Garbage cans only have two handles.”
“How do you make a journalist’s eyes light up?” “Shine a flashlight in his ear.”
“What do you call 25 skydiving journalists?” “Skeet.”
“How do you get a one-armed journalist out of a tree?” “Wave to them.”
“What’s the difference between a smart journalist and Bigfoot?” “Bigfoot has been spotted.”
“Why can’t a ‘journalist’ dial 911?” “She can’t find the eleven.”
“What do you do if a journalist throws a grenade at you?” “Pick it up, pull the pin out, and throw it back.”
“What’s the different between God and a journalist?” “God doesn’t think he’s a journalist.”