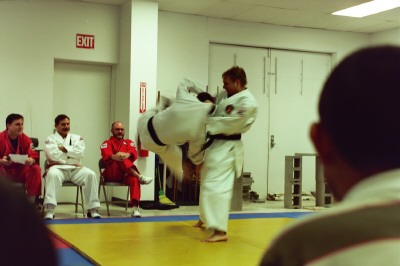 Most of analyst relations for me right now is centered around Software as a Service and events, outside of the day to day partnering issues. We’re already planning the SWG A/R meeting, there is a Meet the Experts Partner/Executive day in Waltham, Ma., the SMB analyst event and any number of “mini” events including podcasts with analysts. Oh yeah, there is an annual report by one of the larger firms that will rate us against the other partnering programs, nothing to sneeze at there.

This weekend however, I’ll delve back into the world of martial arts as I test for my black belt in Jujitsu. While the translation is “gentle art/practice”, in reality it is anything but for me. I’ll throw someone or be thrown over a hundred times, test in wrist locks, arm bar’s, chokes, hold downs and escapes for hours. Needless to say, it will take my mind off of work.So assuming I survive, I’ll be back to my desk jockey position on Monday, albeit a bit worse for wear, but having accomplished a goal I set years back.

Martial art that employs holds, throws, and paralyzing blows to subdue or disable an opponent. It evolved among the samurai warrior class in Japan from about the 17th century. A ruthless form of fighting, its techniques included the use of hard or tough parts of the body (e.g., knuckles, fists, elbows, and knees) against an enemy’s vulnerable points. Jujitsu declined in the mid-19th century, but many of its concepts and methods were incorporated into judo, karate, and aikido.

My blog is about my personal opinions only and do not reflect or represent any company that I work for either past, present or future. I will not hesitate to use the benefit of my experiences in telling the story of what goes on in the real world. beep/bop/boop View all posts by John

One thought on “From technical to physical”