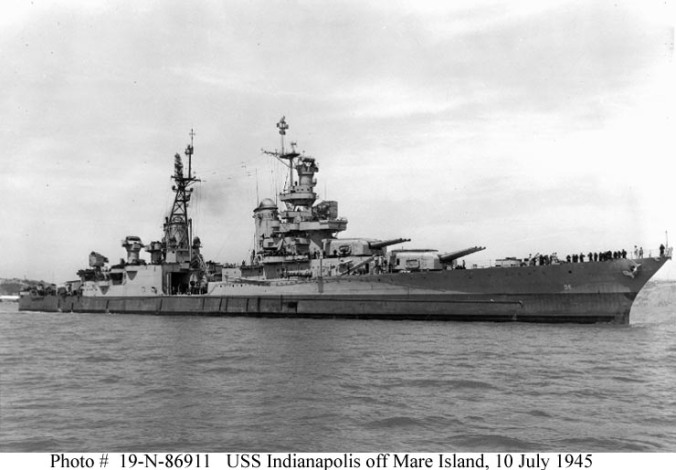 On July 30, 1945, the USS Indianapolis was sunk after delivering the Hiroshima bomb on a super secret mission. So secret, it was days before it was even noticed missing.

When it was hit, 900 of the 1196 men went into the water. Less than 300 came out when they were sighted by accident and rescued after those horrible days. If you recall the movie Jaws, Quint told the story of what happened to the men. Although some died from the torpedo blast, most drowned or were taken by sharks. I always thought as a kid that being eaten was the worst way to go, but I was thinking Lion at the time.

I watched a show on the History Channel about this fateful voyage. Most of the men didn’t even know that they were delivering the “bumb” as Quint called it.

Here’s the description from the movie that tells the gruesome details:

Hooper: You were on the Indianapolis?
Brody: What happened?
Quint: Japanese submarine slammed two torpedoes into our side, Chief. We was comin’ back from the island of Tinian to Leyte… just delivered the bomb. The Hiroshima bomb. Eleven hundred men went into the water. Vessel went down in 12 minutes. Didn’t see the first shark for about a half an hour. Tiger. 13-footer. You know how you know that when you’re in the water, Chief? You tell by looking from the dorsal to the tail. What we didn’t know, was our bomb mission had been so secret, no distress signal had been sent. They didn’t even list us overdue for a week. Very first light, Chief, sharks come cruisin’, so we formed ourselves into tight groups. You know, it was kinda like old squares in the battle like you see in the calendar named “The Battle of Waterloo” and the idea was: shark comes to the nearest man, that man he starts poundin’ and hollerin’ and screamin’ and sometimes the shark go away… but sometimes he wouldn’t go away. Sometimes that shark he looks right into ya. Right into your eyes. And, you know, the thing about a shark… he’s got lifeless eyes. Black eyes. Like a doll’s eyes. When he comes at ya, doesn’t seem to be living… until he bites ya, and those black eyes roll over white and then… ah then you hear that terrible high-pitched screamin’. The ocean turns red, and despite all the poundin’ and the hollerin’, they all come in and they… rip you to pieces. You know by the end of that first dawn, lost a hundred men. I don’t know how many sharks, maybe a thousand. I know how many men, they averaged six an hour. On Thursday morning, Chief, I bumped into a friend of mine, Herbie Robinson from Cleveland. Baseball player. Boatswain’s mate. I thought he was asleep. I reached over to wake him up. Bobbed up, down in the water just like a kinda top. Upended. Well, he’d been bitten in half below the waist. Noon, the fifth day, Mr. Hooper, a Lockheed Ventura saw us. He swung in low and he saw us… he was a young pilot, a lot younger than Mr. Hooper. Anyway, he saw us and he come in low and three hours later a big fat PBY comes down and starts to pick us up. You know that was the time I was most frightened… waitin’ for my turn. I’ll never put on a lifejacket again. So, eleven hundred men went in the water; 316 men come out and the sharks took the rest, July the 30th, 1945. Anyway, we delivered the bomb.

In 2017, a search from Paul Allen of Microsoft has found the wreckage of the Indianapolis 3 miles under the surface on the ocean floor.  It is for some an undersea tomb as is the USS Arizona.

Here is a picture of the Fat Boy bomb that was on the Indianapolis.  I recently visited ground zero and the Hiroshima museum.  It made it clear from the pictures of women, kids and old people who were being trained to fight as both sides anticipated an invasion.

Ground Zero where it was dropped:

Shortly after this, the bomb was dropped and the war in the pacific theater was over. God bless those men who made the ultimate sacrifice for peace and freedom.  They saved millions of lives as the Japanese were preparing to kill or die in an invasion.  Upwards of 2 million lives were saved.

Nagasaki was chosen as the next target as it was mainly occupied by military forces, so it was both strategic and civilian collateral damage was held back.

Further, evidence was found that the Japanese had their own nuclear bomb and tested it on the Island of Hungnam days after the “bomb” was dropped on Hiroshima. So this act not only saved millions of lives, it now appears to have stopped a nuclear war. Reporter David Snell has documented this.

DID IT SAVE LIVES?

If you look at the last battle before dropping the bomb which was Okinawa, it was one of the most bloody battles of the Pacific.  Japan would have been worse for both the US and the Japanese.

Victor Davis Hanson describes it below.

There were also some 2 million Japanese soldiers fighting throughout the Pacific, China and Burma — and hundreds of thousands of Allied prisoners and Asian civilians being held in Japanese prisoner of war and slave labor camps. Thousands of civilians were dying every day at the hands of Japanese barbarism. The bombs stopped that carnage as well.

The Soviet Union, which signed a non-aggression pact with Japan in 1941, had opportunistically attacked Japan on the very day of the Nagasaki bombing.

By cutting short the Soviet invasion, the bombings saved not only millions more lives, but kept the Soviets out of postwar Japan, which otherwise might have experienced a catastrophe similar to the subsequent Korean War.

World War II was the most deadly event in human history. Some 60 million people perished in the six years between Germany’s surprise invasion of Poland on Sept. 1, 1939, and the official Japanese surrender on Sept. 2, 1945. No natural disaster — neither the flu pandemic of 1918 nor even the 14th-century bubonic plague that killed nearly two-thirds of Europe’s population — came close to the death toll of World War II.

Perhaps 80 percent of the dead were civilians, mostly Russians and Chinese who died at the hands of Nazi Germany and Imperial Japan. Both aggressors deliberately executed and starved to death millions of innocents.

World War II was also one of the few wars in history in which the losers, Japan and Germany, lost far fewer lives than did the winners. There were roughly five times as many deaths on the Allied side, both military and civilian, as on the Axis side.

It is fine for Secretary of State Kerry and President Obama to honor the Hiroshima and Nagasaki victims. But in a historical and moral sense, any such commemoration must be offered in the context of Japanese and German aggression.  What the president forgot were these actions that were stopped at Hiroshima:

He forgot the Bataan Death March conducted by the peaceful Japanese war machine.

He forgot the Sandakan Death March

He forgot murder and cannibalism on the Kokoda Track.

He forgot the mutilation and murder of Dutch civilians in Borneo.

He forgot the murder and cannibalism of captured American pilots.

He forgot the murder of American pilots and air crew at Midway.

He forgot the bombing of the hospital ship Manunda.

He forgot the sinking of the hospital ship Centaur.

Nazi Germany and Imperial Japan started the respective European and Pacific theaters of World War II with surprise attacks on neutral nations. Their uniquely barbaric war-making led to the deaths of some 50 million Allied soldiers, civilians and neutrals — a toll more than 500 times as high as that of Hiroshima.

Update:  The last surviving member of the Enola Gay died at age 93 in July of 2016.  Theodore Van Kirk was the navigator.  a brief excerpt regarding the issue of War and dropping the bomb is as follows:

The crews that dropped the atomic bombs on Hiroshima and Nagasaki were seen by Americans as saviors for ending the war. But over the years, the morality of atomic warfare and the need for the bombings has been questioned.

“We were fighting an enemy that had a reputation for never surrendering, never accepting defeat,” he said. “It’s really hard to talk about morality and war in the same sentence.”

He continued: “Where was the morality in the bombing of Coventry, or the bombing of Dresden, or the Bataan Death March, or the Rape of Nanking, or the bombing of Pearl Harbor? I believe that when you’re in a war, a nation must have the courage to do what it must to win the war with a minimum loss of lives.”

UPDATE 2: I ran across this article recently discussing “A Reality Check For Those Who Deplore The Nuking Of Japan”.  It’s a good read and another intellectually intriguing article on the morality of bombing vs. fighting.

Nowadays, many question whether those bombs were necessary.  Given that they killed almost exclusively civilians and that the second of the two was dropped only two days after the first, many people have concluded that the attack was immoral.  Today, the typical American is likely to react to the words “Hiroshima” and “Nagasaki” with a vague sense that our country did something wrong.

But the nuking of Japan was a moral act: war is hell for those who do the actual fighting, so those two bombs put an end to their suffering.  This was true for the soldiers on both sides (even a Japanese soldier must have felt relieved to know he was going to survive unscathed).  A purely theoretical model for explaining why dropping nukes was bad appeals only to those who have no skin in the game.

The Japanese war had already killed millions, most of whom were civilians.  The two nukes killed 140,000.  Do the math.  It is a distasteful application of arithmetic, but it is an application that soldiers have to do all the time in their struggle to win a war.