I’ve written about Internet Road Rage and Stupid Things Smart People do. It’s also why I stay away from a lot of social media. My life is a lot happier that way. Also, I don’t have to worry about my body image that Zuckerberg lied about yesterday.

Just go away if you are offended (not by me, but by anything and then I have to hear about it). Here’s a clue, don’t read what offends you. Here’s a 2nd clue, just move along if it does. No one cares whether you get offended or not anymore. Everyone is offended, so why should we? More time is wasted arguing on the internet or arguing about topics that are….well see above.

I read that it must be tough to grow up with such a thin skin that words can hurt you so badly.

Go away and leave me alone.

“Mediocre men often have the most acquired knowledge.”

I’ve noticed how smart people are when they have a phone to look up the answer to anything, without learning how to do something. I’m not advocating a life of mistakes to learn, but most of us learn more by having to re-do something than breezing through it.

I also noticed that the most insane arguments on the Internet are by those partially informed, yet willing to show their ignorance or lack of IQ in public. As usual, it is most often done in the cesspool that is Twitter or Facebook.

Please stop it so the rest of us can enjoy it again.

“Discretion is not the better part of biography.” – Lytton Strachey

For me, this goes well with, “you are lucky if you are over 50 because you did all of your stupid stuff before the Internet”. Amen to that. 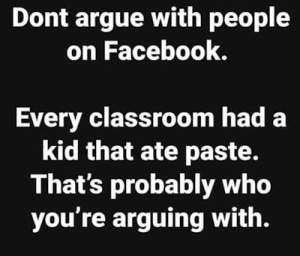 I already talked about this in the post “Stupid things that smart people do“.

I posted about how people have Internet road rage also as they are so brave hiding behind their screens doing things that would get their asses kicked in real life.

Arguing on the Internet is the biggest waste of time, other than social media.  Why do you ask (even if you don’t)?  Besides being a waste of time, you are looking at the best side of people and comparing it to the worst side of you (they take better vacations, their family is nicer, I’m not as pretty……).  It’s like a first date or job interview.  You are seeing the side they want to show you, not the real McCoy.

People think they are going to convince others that they are wrong or should switch to think like them because they are right.  Neither of these will happen.  You won’t convince anybody of anything and you just wasted more time in addition to Facebook, Twitter (the cesspool of the Internet) or any of the other time suck sites.

The other people that argue with you are the ones who do it to piss you off.  I know some of these people who do it for sport.  Hell, I get people in comments here who want to make their point because they believe they are right and I am wrong.  My answer is get your own blog.

Don’t be a time waster.  Don’t argue with people who ate paste.  Life is too short and someone out there really needs your help or time, not the kid from school.

What is Internet Road Rage?  My definition is that you are willing to engage in hateful, spiteful language aimed at someone whom you either don’t agree with ideologically/religiously/politically/any excuse to vent, or a counter attack to someone who got on you or your ideas.

Here is the caveat.  You most likely wouldn’t act or speak that way in person or to someone’s face with that tone or language.  Most of you have either more self-decency in person or a survival instinct that would prevent you from getting your ass kicked.

Worse, you could or are likely a Porch Dog, one who barks severely, but is no real threat.  In other words, you yap by tapping the keyboard but pose no intellectual threat.

Most people have road rage inside them.   Here is how it works:

Polite drivers may think that dialogue like that is the territory of deranged, out-of-control, or terrible drivers, and maybe they’re right. But according to a new survey from AAA, most drivers in the United States display signs of road rage. So too bad, you supposedly polite drivers.

The survey, published today, polled 2,705 drivers 16 years old and older about their road rage habits. Seventy-eight percent of drivers—more than three-quarters—reported engaging in some kind of aggressive driving maneuver, including tailgating, yelling, honking, gesturing angrily, purposely blocking another vehicle, cutting someone off, confronting someone, and intentionally ramming another car.

There is every flavor in the book, more than I can write about.  It started with email flaming.  As soon as forums or ideological websites like Quora, Instagram, Facebook, The Huffpo, Fox News, etc., etc.  The net of it was that people were able to transfer their hate to others online.  The comments are mendacious, eviscerating and frequently ad hominem attacks that most wouldn’t do face to face.

I call B.S. as  most of those people are cowards and wouldn’t stand up to others in real life.  There are of course some that do speak their minds, but they generally have more of a life than pissing on each other online.

What would the other person do?  Back in the schoolyard days, you say something like what is written almost everywhere now and you’d have to fight.  Most people don’t like to fight and there are a few who know very well how to protect themselves.  I’d even bet that a lot of folks who are right wingers fully explore their second amendment rights.  Who wants to walk into that?  There are some who would be very able to kick your ass and would.

WHY DO YOU DO IT?

I use the word you in its’ plural and direct form.  I’m pointing at everyone who reads this because most of you have crossed the line when someone pissed you off.

The reason is that you envision some curtain of invisibility or invincibility because you are typing to a screen.  You wouldn’t say it in person, or wouldn’t say it that way.  Therefore, you are either a coward or a bully.  Most people lose considerable IQ points when you think this way.

So stop it.  Grow up and act like an adult.  Be big enough to pass over some typed letters of venting.  More than likely, there isn’t enough reason for responses that are so harsh.  Before you type it, imagine saying it face to face and see if you would do it, or risk either your reputation or an ass whooping. 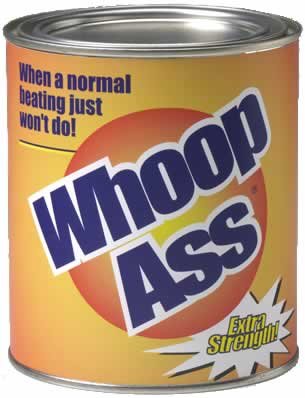