This goes with the Public Speaking Words That Should Be Banned

This is more on my war to out think AI, or at least not have it run my life in the background. Besides, robots always kill their humans. Also, Google is involved so I’m sure there is no-goodery going on.

You probably haven’t noticed, but there’s a good chance that some of what you’ve read on the internet was written by robots. And it’s likely to be a lot more soon.

Artificial-intelligence software programs that generate text are becoming sophisticated enough that their output often can’t be distinguished from what people write. And a growing number of companies are seeking to make use of this technology to automate the creation of information we might rely on, according to those who build the tools, academics who study the software, and investors backing companies that are expanding the types of content that can be auto-generated.

“It is probably impossible that the majority of people who use the web on a day-to-day basis haven’t at some point run into AI-generated content,” says Adam Chronister, who runs a small search-engine optimization firm in Spokane, Wash. Everyone in the professional search-engine optimization groups of which he’s a part uses this technology to some extent, he adds. Mr. Chronister’s customers include dozens of small and medium businesses, and for many of them he uses AI software custom-built to quickly generate articles that rank high in Google’s search results—a practice called content marketing—and so draw potential customers to these websites.

“Most of our customers don’t want it being out there that AI is writing their content,” says Alex Cardinell, chief executive of Glimpse.ai, which created Article Forge, one of the services Mr. Chronister uses. “Before applying for a small business loan, it’s important to research which type of loan you’re eligible to receive,” begins a 1,500-word article the company’s AI wrote when asked to pen one about small business loans. The company has many competitors, including SEO.ai, TextCortex AI and Neuroflash.

Google knows that the use of AI to generate content surfaced in search results is happening, and is fine with it, as long as the content produced by an AI is helpful to the humans who read it, says a company spokeswoman. Grammar checkers and smart suggestions—technologies Google itself offers in its tools—are of a piece with AI content generation, she adds.

More at the WSJ, but it might be behind a paywall

The rise of AI-generated content is made possible by a phenomenon known variously as computational creativity, artificial creativity or generative AI. This field, which had only a handful of companies in it two or three years ago, has exploded to more than 180 startups at present, according to data gathered by entrepreneur Anne-Laure Le Cunff. These companies have collected hundreds of millions of dollars in investment in recent months even as the broader landscape for tech funding has become moribund.

A lot of the content we are currently encountering on the internet is auto-generated, says Peter van der Putten, an assistant professor at Leiden Institute of Advanced Computer Science at Leiden University in the Netherlands. And yet we are only at the beginning of the deployment of automatic content-generation systems. “The world will be quite different two to three years from now because people will be using these systems quite a lot,” he adds.

By 2025 or 2030, 90% of the content on the internet will be auto-generated, says Nina Schick, author of a 2020 book about generative AI and its pitfalls. It’s not that nine out of every 10 things we see will be auto-generated, but that automatic generation will hugely increase the volume of content available, she adds. Some of this could come in the form of personalization, such as marketing messages containing synthetic video or actors tuned to our individual tastes. In addition, a lot of it could just be auto-generated content shared on social media, like text or video clips people create with no more effort than what’s required to enter a text prompt into a content-generation service.

This was about how I started out on Covid and the Jab. I don’t even think I’m a conspiracy theorist when you are right this many times. I don’t know that AI is the next tin foil hat thing, but I do know that there are people who are going to use it against us.

People who can’t distinguish between entomology and etymology bug me in ways I can’t put into words. 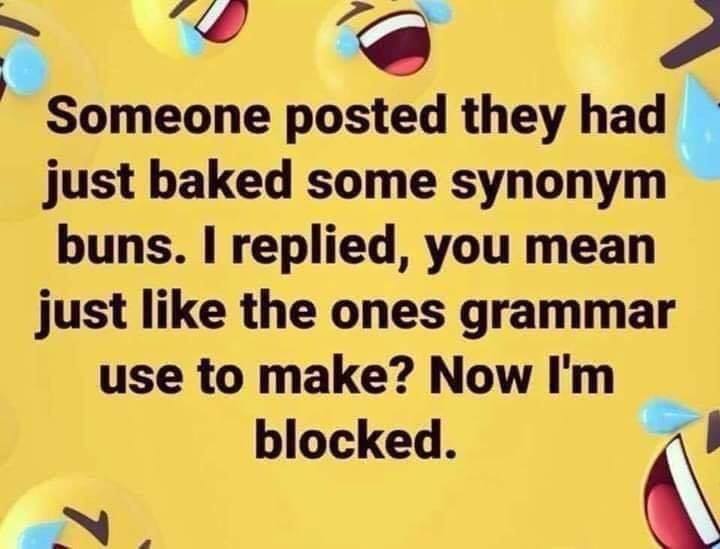 1) The bandage was wound around the wound.

2) The farm was used to produce produce.

3) The dump was so full that it had to refuse more refuse.

4) We must polish the Polish furniture.

5) He could lead if he would get the lead out.

6) The soldier decided to desert his dessert in the desert.

7) Since there is no time like the present, he thought it was time to present the present.

8) A bass was painted on the head of the bass drum.

9) When shot at, the dove dove into the bushes.

11) The insurance was invalid for the invalid.

12) There was a row among the oarsmen about how to row.

13) They were too close to the door to close it.

14) The buck does funny things when the does are present.

15) A seamstress and a sewer fell down into a sewer line.

16) To help with planting, the farmer taught his sow to sow.

17) The wind was too strong to wind the sail.

18) After a number of injections my jaw got number.

19) Upon seeing the tear in the painting I shed a tear.

20) I had to subject the subject to a series of tests.

21) How can I intimate this to my most intimate friend?

There is no egg in eggplant nor ham in hamburger; neither apple nor pine in pineapple. English muffins weren’t invented in England or french fries in France. Sweetmeats are candies while sweetbreads, which aren’t sweet, are meat.

We take English for granted. But if we explore its paradoxes, we find that quicksand can work slowly, boxing rings are square, and a guinea pig is neither from Guinea nor is it a pig. And why is it that writers write but fingers don’t fing, grocers don’t groce, and hammers don’t ham? If the plural of tooth is teeth, why isn’t the plural of booth beeth? One goose,2 geese. So one moose, 2 meese? One index, 2 indices?

Doesn’t it seem crazy that you can make amends but not one amend.   If you have a bunch of odds and ends and get rid of all but one of them, what do you call it?

If teachers taught, why didn’t preachers praught? If a vegetarian eats vegetables, what does a humanitarian eat?

Sometimes I think all the English speakers should be committed to an asylum for the verbally insane. In what language do people recite at a play and play at a recital? Ship by truck and send cargo by ship? Have noses that run and feet that smell? How can a slim chance and a fat chance be the same, while a wise man and a wise guy are opposites?

You have to marvel at the unique lunacy of a language in which your house can burn up as it burns down, in which you fill in a form by filling it out, and in which an alarm goes off by going on.

English was invented by people, not computers, and it reflects the creativity of the human race, which, of course, is not a race at all.