I saw this question by analyst James Governor in an obviously sarcastic tweet a while back during a twitter debate on the 2nd Amendment.  I did not want to engage in a useless waste of time in a twitter-fest over a subject because James is educated on tech, but very wrong on certain issues such as this. 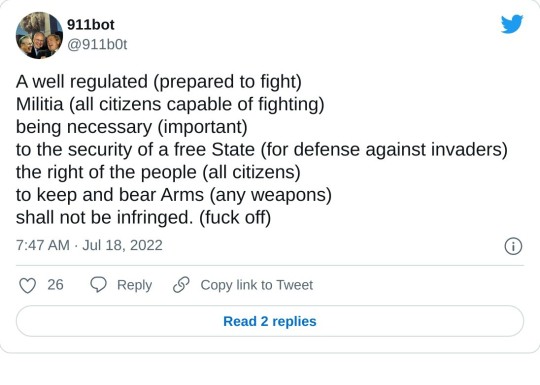 I also did not have as eloquent answer as Allen West, Representative from Florida.  An African-American tells how even whites would be held in slavery were it not for the 2nd Amendment as well a lesson in history as to who are the militia and why it exists.  Lessons that real Americans know.  Commies want to take away guns to control the population, right James?

Allen is a true American hero and forgetting the 2nd Amendment issue, is the standard for which politicians should be held to for integrity.

Here, he defines the enemy:

Also, he notes there are never any anti-gun protesters or appeasers at NRA events.  At least they are smart enough for that.

I also note that the cities with the highest crime have the most limited concealed carry laws.

It is about preserving order.

George Washington: “Firearms are second only to the Constitution in importance; they are the peoples’ liberty’s teeth.”

For those that have questions about why we have guns or that we should ban them, please answer these questions first.

2. How will you stop the bad guys like the Taliban and Al Qaeda from using other weapons?

3. When in history was man not covetous enough to use force to take his neighbor’s property?

4. Prisoners are able to make weapons in prison without gunsmith ability, how will you stop criminals from making guns?

5. The best protection from terror and attack are the best defense or the greater ability for offense.  You have now taken that away.  What is your protection?

6. When in the history of man have we not been at war somewhere in the world?

So here is the answer.  Send your complaints to Allen, but be prepared for a beat down like you’ve never experienced.

Below, Yamamoto was the Commander of the Japanese Forces and architect of the Pearl Harbor attack.  He was educated and lived in the US.

4 thoughts on “2nd Amendment, Who Are the Militia by Allen West”